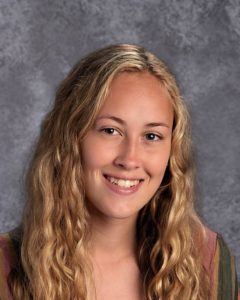 Emily goes above and beyond to reach her full potential in all areas of her life. She is a hard worker and takes her academics and future planning seriously. She is a methodical thinker and challenges herself on a regular basis. She has taken several University and Advanced Placement courses in her Junior and Senior years, and constantly strives to do more.

Last spring, Emily was selected by the New Lebanon Central School District scholarship committee to receive the RPI Medal, the Williams College Book Award and the Clarkson Leadership Award. Those presented with these honors not only exhibit strong leadership skills but also receive high grades in challenging courses while having an extensive involvement in extracurricular activities. Emily is also a member of the National Honor Society.

Outside the classroom, Emily has participated in the Varsity Track and Soccer teams. She has received numerous accolades related to soccer. She is a leader among her teammates and a voice of reason in stressful situations on the field. Emily was voted class president by her peers as well as Student Council treasurer. She also participates in Students Against Destructive Decisions (SADD), senior band and the Food Club.

In Emily’s “free time”, you can find her working at Jiminy Peak Ski Resort, or running her own self- employed pet sitting service. She also has numerous amounts of volunteer hours through services such as our in-house Tutoring Center, the Community Thanksgiving Dinner, Memorial Day Assembly and Veteran’s Breakfast and the NL Soccer Tournament- amongst others.

Emily will graduate with a Regents Diploma with Advanced Designation, with Honors, with Annotations of Mastery in Math and Science. In the fall, Emily plans to attend Siena College where she will major in Chemistry. Emily plans to pursue a career as a research scientist.

Emily attributes her success to hard work and support from her family and teachers. 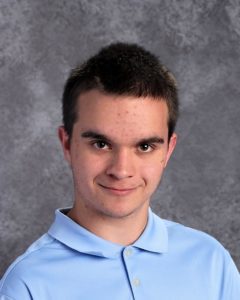 Daniel is a well-rounded young man who is driven and focused on any task before him. His senior year, he took an Independent Study AP Computer Science course because he had no room in his schedule due to a full course load of University, AP classes and other electives. He completed this course entirely on his own while at home.

Daniel is a vital member of New Lebanon CSD’s music program, participating in every band and choir available. He has made the High Honor Roll consistently for the past three years, and his diligence in the classroom earned him a spot in the National Honor Society. The New Lebanon CSD Scholarship Committee also voted Daniel as a recipient of the St. Michael’s College Book Award because he continues to demonstrate a sustained and sincere commitment to community service. Daniel was nominated by High School Principal Matt Klafehn and School Counselor Meghan Evans to receive the NYS Attorney General’s Triple C Award, recognizing his courage, character and commitment.

Outside of school, Daniel is heavily involved in the Boy Scouts of America. He has been a Scout since the age of 7, and has earned the rank of Eagle Scout – something only four percent of Scouts have attained since the early 1900’s. He has made such an impression with the organization that he was inducted in the Order of the Arrow, BSA’s National Honor Society. He was chosen for this by his peers as someone who best exemplifies the Scout Oath and Law in their daily lives.

Daniel plans to attend SUNY Plattsburgh in the fall, dual majoring in Computer Science and Music. He plans to pursue a career in music software or education, and attributes his success to his strong work ethic.